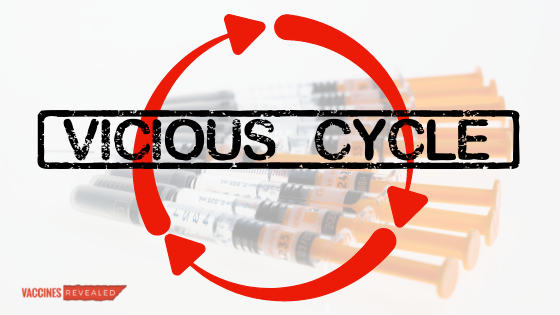 There has been a lot of discussion, research and debate about the MMR vaccine. It’s been in the spotlight due to its association with autism (the Department of Justice’s own expert witness was fired for saying that he believed in some cases, the MMR does cause autism). It has a history of creating adverse reactions like high fever and seizures. But one feature of the vaccine might explain why the “epidemic” of measles has exploded, despite the fact that the vaccine has been forced on thousands of people:

The MMR vaccine can be the cause of a case of measles.

That’s right…as you can see on The FDA’s own package insert, one of the many side effects of the MMR is that a percentage of people who receive the vaccine develop symptoms of measles. In fact, an article in the Journal of Clinical Microbiology describes a test to differentiate between “wild measles” and vaccine-related measles. The test uses genotyping to determine the strain of virus in the patient’s system, which makes it possible to identify whether the measles is a reaction to the vaccine or a different, “wild” strain.

While it’s true that a wild strain of measles is infecting some people, it may also be true that many of the people who are being diagnosed with measles are experiencing the “atypical measles” or “measles-like symptoms” that are listed on the package insert as a side effect of the vaccine. These symptoms include fever, “measles-like” rash, runny nose, sore throat, cough, headache, conjunctivitis and dizziness—everything, in fact, that you’d expect to see if you’d contracted measles.

Based on data obtained from genotyping during the measles outbreak that originated at Disneyland in 2015, it’s estimated that 38% of the measles cases tested were vaccine-related.

Without testing the genotype of the virus, it’s impossible for a doctor to differentiate wild measles from a reaction to the vaccine.

This can create a vicious cycle…a case of measles is reported, which causes a lot of press and hype. This leads to people panicking and being vaccinated with the MMR, which leads to more people coming down with symptoms that look like measles. This makes the “epidemic” look like it’s growing, so more people line up to be vaccinated…leading to more illness and more vaccination.

Consider this scenario in relation to what is currently happening in New York. A neighborhood is singled out due to someone falling ill with measles. Government officials crack down on the area and mandate vaccines for everyone 6 months of age and older. Some of the people who receive vaccines come down with a fever, rash, and other symptoms of measles—causing even more people to be vaccinated under threat of being charged with a misdemeanor and then fined $1,000.

Why has the measles outbreak in New York ballooned so quickly, when other states (some of which have a significantly lower rate of vaccination than New York) have seen only a handful of cases…or none at all?

Could it be that New York’s “emergency” mandated vaccine policy is actually to blame for many of the cases that are now being reported?

Ten percent of people vaccinated with the MMR shot develop a fever, and five percent develop a rash (that’s according to those who ardently support the vaccine, so it’s possible that the numbers might be even higher). The rash can show up anywhere from 3 to 28 days post-vaccine, which means that the window is quite wide and could easily be diagnosed as measles contracted before vaccination. If 10,000 people are vaccinated by government mandate, and 5% of them develop a fever, rash and other symptoms from the vaccine, that means 500 cases of measles could be reported as part of an outbreak…a huge number, considering that the entire “epidemic” throughout the US has seen just 695 cases.

Between October 17th and April 24th, over 21,000 people were vaccinated with the MMR in just two Brooklyn neighborhoods. Three-hundred and ninety cases of measles were reported in Brooklyn and Queens during the same time frame.

That means that over half of all the US cases in the 2019 measles “epidemic” occurred in New York, most of them in neighborhoods where the MMR is being aggressively mandated. In the five months since the outbreak began, the largest jump in reported measles cases there occurred in the last month…after efforts to increase vaccination rates began. In fact, despite the fact that vaccination rates for the MMR skyrocketed nationwide after the press began to report dire predictions of a measles epidemic early this year, cases jumped a full 20% between April 4th and April 11th alone.

When people panic, decisions get made that are ill-informed and often damaging in the long run. What the government is creating through hype and forced vaccination is not herd immunity but herd mentality–and while herd mentality is convenient for ranch hands and slaughterhouse workers, it’s never been particularly beneficial for cows.