African Green Monkeys, Vaccines, and You 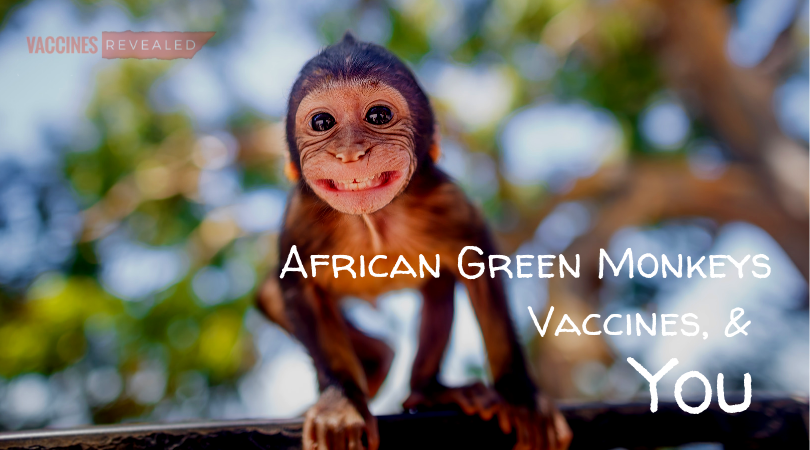 Did that title confuse you?

Once you read this, I promise…you’ll be even more perplexed!

What do African Green monkeys have to do with vaccines? Certain childhood vaccines (DTaP and Rotavirus) contain “Vero cells,” an ingredient that sounds innocent enough…

…until you research what these cells actually are.

Vero cells are cells harvested from the kidneys of African Green Monkeys. Never heard of those? I hadn’t either, so I looked them up. Here’s what a Green Monkey looks like:

African Green Monkeys belong in… Africa. They do not belong in your body. And there’s good reason for that–

Monkeys and humans are close enough cousins that many of the viruses that infect monkeys can also infect humans. A powerful example of this is the AIDS epidemic, which started when SIV, a monkey virus similar to human HIV, was introduced to humans through the consumption of bushmeat.

Monkeys can also carry a virus called SV40, which can infect humans and has been found in certain cancerous tumors including brain cancer, osteosarcoma, mesothelioma, and non-Hodgkin’s lymphoma. It has also been implicated in the development of leukemia.

A monkey infected with SV40 won’t develop cancer because, in that species, cells infected with the virus will die before replicating.

That’s not the case for other species, however…including hamsters, mice, and humans.

Research has uncovered compelling evidence that the virus does, indeed, play a role in human cancers.  And viruses do make their way from their animal hosts into humans via vaccines.

We know this because in 1954 through 1961, vaccines contaminated with SV40 were given to thousands of people. As recently as 2010, pig, avian, and monkey virus contamination were found in rotavirus vaccines… causing the FDA to suspend GlaxoSmithKline’s Rotarix from use.

So why are vaccines containing monkey cells still on the market? Why are they considering using them in the development of upcoming flu vaccines?

Apparently, when it comes to vaccines, all potential damage can be waved away with one simple phrase:

“The benefits outweigh the risks.”

The further you investigate, the more clear it becomes.