More and more researchers and doctors are raising red flags as they see more evidence that this epidemic is related not only to environmental, food, and water toxins, but specifically to those in vaccinations. In 1995, the immunization schedule for children had 19 vaccinations before the age of 16. In 2001, that number is now 28 before the age of 18.

Following the 2016 schedule, a child can receive up to 72 vaccinations if they have all the doses of the vaccines, all the boosters, and a double-dose of the annual flu shot done.

While the state of California has long been in favor of natural medicine and freedom to choose your own method of healing, all that changed in June 2015 when Governor Jerry Brown signed the controversial SB277 bill eliminating personal and religious exemptions for vaccines.

Could the increased rates be contributing even partly to a stunningly quick rise in autism rates? Let’s examine. Autism rates are on the rise like never before. Source: Autism Speaks

Looking at the nationwide data shown above, many doctors are predicting that the autism rates will keep rising. But the CDC refuses to research the potential link to vaccine additives, even after we saw (at least those of us that read alternative media sources, that is) a senior CDC scientist, Dr. William Thompson, admit that the CDC purposefully omitted important results from at least one study.

Now, movies like VAXXED and the Docuseries Vaccines Revealed ( starting Jan 10-18th) are coming out to spread awareness, alternative media is sharing stories of countless vaccine injured children, and even well known personalities with huge platforms like Jim Carrey are speaking out against vaccine additives.

Instead of pumping the brakes a bit and reevaluating things, the pharmaceutical industry has busy been developing almost 300 new vaccines as of 2012: 170 for infectious disease, and 102 for cancers. Unlike prescription drugs, the companies cannot be held liable in court when their vaccines harm people, which may explain the new focus according to one whistleblower, Brandy Vaughan.

The effect on the health of the population when adding so many vaccines is difficult to predict, and even harder to track. Most of the vaccines are studied by the makers themselves, in combination with one or two on a rare occasion, but the real life effect of injecting people with large amounts vaccines in a small amount of time is not studied.

The biggest concern many have, is that when mandatory vaccination laws pass, people will not be able to make a decision for themselves after analyzing the risks.

Thanks to controversial laws like SB 277 in California, people are literally losing control over their own bodies.

The state of California passed its controversial mandatory vaccination law (SB 277), which removed personal and religious reasons from the list of being exempt from vaccinations, with the goal of increasing vaccination rates. In 2016 the rates of autism in California public schools jumped 7% in general, but rose especially high for kindergarten kids – by 17%. As the Sacramento Bee reported, the number of kids diagnosed as autistic has risen seven-fold since 2001.

Increases have come each year, but in 2016 following the mandatory vaccination law, the rate jumped even higher than usual: a total of 6,368 additional cases were reported from the previous school year. Comparing the 2013-2014 school year to 2014-2015, the number of additional cases was 6,076. The school year prior to that saw an increase of 6,089; or 13 extra cases reported compared to the increase in ’14-15 (see the Bee article here for more info).

Because vaccines have mercury, aluminum, and many toxins in them, it is becoming more frequent for kids to experience severe adverse reactions, including many symptoms that are identical to those on the autism spectrum.

While nationwide, 1 out of 68 kids are autistic, the number is now more than 1 out of 65 kindergarten kids in California public school.

When SB 277 went into effect, many parents with young children who were behind the vaccination schedule or did not start vaccinating yet, were forced to catch up or they could longer go to a public school. As a result, many children received a high amount of vaccines in a very short period of time.

When it comes to toxins in vaccinations, the more vaccines are given at one time, the bigger the risk that a child will experience a severe adverse reaction.

When we hear of a child left disabled or even dead after receiving vaccinations, it is often after receiving multiple vaccines at a time.
“I don’t want Matthew to die in vain because of vaccine manufacturers not doing a better job making safer vaccines, before pushing them onto unsuspecting parents and their innocent babies they view as profitable beings,” his mom writes.One example occurred when five-month-old Matthew Gage Downing-Powers went to the doctor in October 2013. His parents were told that he needed to catch up on his vaccinations, so he received 8 in one visit: DTaP (3 in 1), Polio, Hib, Hep B, Pneumococcal PCV and the oral Rotavirus vaccine. He passed less than two days after the visit.

Matthew’s case is no longer rare, with similar tragedies occurring in many families.

Many children survive, but end up being disabled for life. 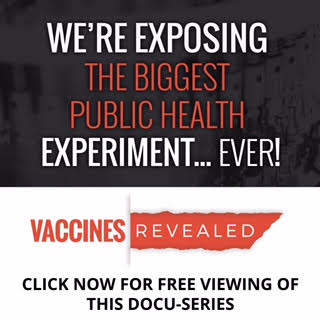 ACCORDING TO HIS PARENTS, “AS A CUMULATIVE RESULT OF HIS RECEIPT OF EACH AND EVERY VACCINATION BETWEEN MARCH 25, 2003 AND FEBRUARY 22, 2005, RYAN HAS SUFFERED . . . NEUROIMMUNOLOGICALLY MEDIATED DYSFUNCTIONS IN THE FORM OF ASTHMA AND ASD,” REPORTED THE HUFFINGTON POST.

While the pharmaceutical industry refuses to even consider that these cases exist and that vaccinations may add greatly to autism risk, research such as from 2011 Current Medicinal Chemistry study warns that vaccines may be not as beneficial as originally thought, in fact they warn:

“THE POSSIBILITY THAT VACCINE BENEFITS MAY HAVE BEEN OVERRATED AND THE RISK OF POTENTIAL ADVERSE EFFECTS UNDERESTIMATED, HAS NOT BEEN RIGOROUSLY EVALUATED IN THE MEDICAL AND SCIENTIFIC COMMUNITY.”

Mainstream media and the manufacturers insist that they are safe, but what happens when large doses of vaccines, and their toxic additives, are administered to a child all at once? Unfortunately, parents are being left in the dark, and if recent history is any indication, they may be putting their children at risk as well.

If California is serious about protecting the health of its children more than profits of the pharmaceutical industry, they should prove it by addressing these concerns before it’s too late.