High levels of aluminum found in the brains of autistic people 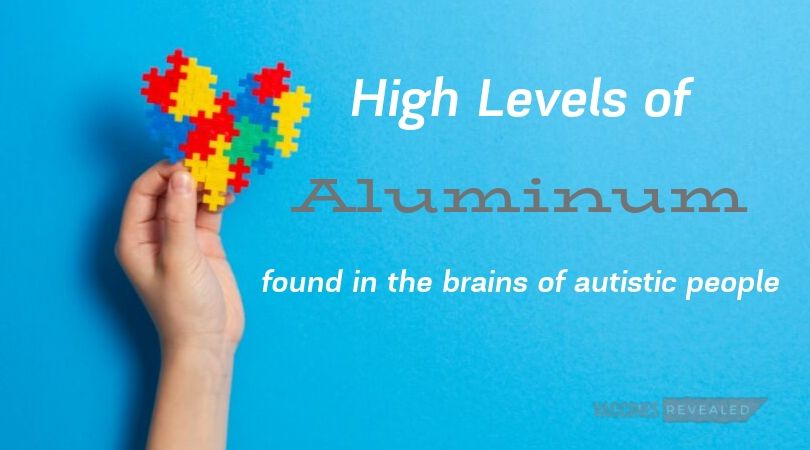 Do vaccines cause autism? Despite continued denial by vaccine manufacturers and the CDC, there is mounting evidence that suggests that the aluminum in vaccines does, indeed, pass through the blood-brain barrier and that people with autism have extremely elevated levels of aluminum in their brain tissue.

A study published in 2018[examined the brains of people on the autistic spectrum who had donated their bodies to science. What they found is extremely alarming, and should be common knowledge for everyone who is considering vaccination:

Every one of the autistic brains examined contained not just some aluminum, but aluminum levels that surpassed those previously recorded… by a substantial amount.

They also found that, of the five brains measured for aluminum, the levels were higher among males than females (boys are 4 times more likely to be diagnosed with autism).

Not only was the amount of aluminum a significant concern, but the location of the aluminum was also telling.

Researchers found the metal in inflammatory and non-neuronal cells, which reached the brain through blood and lymph…meaning that the aluminum contaminating the brain was injected rather than ingested.

Vaccines use various forms of aluminum as an “adjuvant,” an agent that aggravates the immune system. In theory, this causes white blood cells to rush to the site of the injection and pick up viral cells, mounting a response that creates immunity.

While the immunity caused by vaccines is debatable, what is certain is that the white cells also pick up aluminum, encase it, and pass it throughout the body…including the brain.

The brain of one 15-year-old autistic subject had aluminum levels so high that the only comparable data on record was from a 45-year-old man who died of Alzheimer’s disease…a malady also associated with high levels of aluminum.

These findings are consistent with other research, and point to both a cause of some types of autism (aluminum buildup in the brain) and the source of that aluminum…

What will it take to get the FDA and the CDC to reconsider the safety of vaccines?

The CDC itself reports that 1 in 59 children in the US is on the autistic spectrum. That’s an astoundingly large number of people suffering from a life-altering diagnosis, and it’s nothing short of criminal that action has not been taken to explore every possible cause of this epidemic.