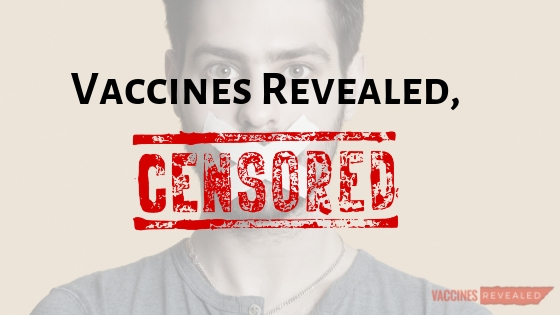 The First Amendment of the Constitution of the United States reads:

“Congress shall make no law respecting an establishment of religion, or prohibiting the free exercise thereof, or the freedom of speech, or of the press; or the right of the people peaceably to assemble, and to petition the government for a redress of grievances.”

This amendment is a vital part of our constitutional rights—rights that should be valued and defended at all costs, as history has shown repeatedly that when these freedoms are violated, democracy cannot stand. Censorship that prevents free speech and limits what’s printed and distributed publicly is the first step on a slippery slope that leads to a general loss of freedom and independent thought.

This week, the Revealed Films team came face-to-face with a violation of these vital freedoms—and we believe that you have a right to know exactly what’s going on.

Slowly and quietly, social media sites like YouTube, Facebook, Google, and Pinterest have been developing methods of silencing those whose opinions they see as a threat to the liberal agenda…clamping down through filters, site blocking, and demonetization in order to limit the reach of those with whom they disagree.

Does this sound crazy? You bet. It is crazy.

But it’s happening, and it’s threatening our ability to bring you the content you care about.

What Revealed Films is Experiencing

This week, while in the middle of a re-launch for our docu-series “GMOs Revealed,” our team discovered that YouTube would no longer allow us to upload certain episodes of the series—instead, we were given this message:

So why are we unable to upload our videos? And why are our Vaccines Revealed videos being blocked?

YouTube has decided to crack down on users who support vaccine rights, or who advocate for vaccine safety and the individual’s right to choose what happens to their own body. And while we are still scratching our heads over how GMOs Revealed relates to this, we do know one thing—

We won’t give up on bringing the truth to as many people as possible.

For years, accusations have been made that the media is pushing a left-wing agenda. In fact, in 2017 Google (which owns YouTube) was fined an unprecedented 2.7 billion dollars by the European Union for manipulating search results. In a congressional hearing that took place in April of 2018, Facebook was accused of censoring users with conservative views. And Pinterest has blocked all searches for vaccines, to avoid users coming across “harmful misinformation” about the dangers of vaccines.

Recently, BuzzFeed—a liberal-leaning digital media company—published a story that made inflated claims that YouTube’s algorithms lead people to “divisive, conspiratorial, and sometimes hateful” content. In response, YouTube increased restrictions on any content that it considered anti-vaccine, demonetizing videos that contain information they disagree with—meaning that these videos will not be allowed to carry advertising. 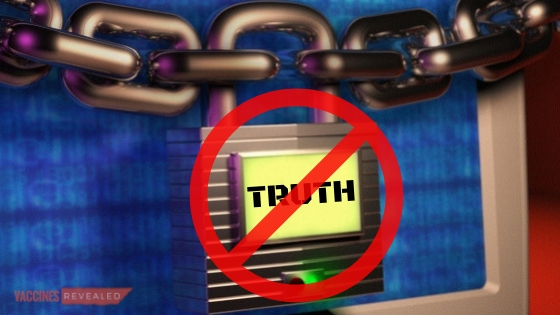 In addition, the vaccine videos that remain (without advertising) have had a link inserted beneath them…which brings viewers to either biased Wikipedia pages about “vaccine hesitancy” or an article about the MMR vaccine that states it does not cause autism.

Then, BuzzFeed broke the story about the changes YouTube made…again attracting viewers to its struggling site. The media company laid off 15% of its employees in January, most likely due to the fact that people are making the choice to get their news from a variety of sources rather than “Big Media” mills that are funded and run by politically biased entities. No wonder BuzzFeed is interested in stifling companies like Revealed Films who are doing their best to provide an alternative to Big Media’s pharmacy-funded propaganda.

Believe it or not, by claiming that questioning the safety and efficacy of vaccines represents a “threat to children.”

Doctors, concerned citizens, scientists, alternative health care practitioners, and parents whose children have been damaged by vaccines whose main goal is to protect children from avoidable harm are, most definitely, not a threat to children.

But…we are a threat to Big Pharma, which is why these efforts are being made to silence us.

Where is This Leading Us?

Facebook, Google, and YouTube may not technically be required to publish all reasonable content, but they ought to be required to disclose their political bias as well as warn people about changes in policies before removing, blocking, or otherwise censoring content. We only need to look at the situation in China, where information is routinely censored and the internet is limited to what government officials deem acceptable, to see why it’s important that we maintain our freedom of speech and press. When information is controlled by a small number of individuals with a specific agenda, the people suffer.

We are promising you right now that we won’t give up. YouTube might consider the truth about vaccines to be “dangerous and misleading,” but we believe the public deserves to know how dangerous vaccines are to the health of our children…and we will not let anyone stop us from our mission to give you the information you need to make truly informed decisions about your family’s health.

Currently, YouTube has not answered our requests to explain why videos about GMOs are being blocked. They have not contacted us regarding the demonetization of Vaccines Revealed or the blocking of our content related to vaccines. Our team continues to attempt to reach them; in the meantime, we will continue to broadcast GMOs Revealed through a different channel—and there will be no change in our viewer’s experience as they watch the series. We will continue our work with Vaccines Revealed, and we will not be silenced by opposition and censorship.

But we’re asking for your help. First and foremost, we feel that it’s vitally important for people to understand that the media sources they depend on and trust are, in fact, censoring the content that reaches the public. This is not speculation but fact, and it will continue for as long as we allow it. Please consider helping us keep the freedom of speech and the right to free press that is so vital for democracy.

If you’d like to help, share this article with your circle of influence and consider posting about what’s happening to our freedom of speech and press on your social media channels. If our reach becomes limited due to censorship, the help of supporters like you will become even more vital in sharing the word about these docu-series events and important developments.

Together, we can keep the voice of reason and truth from being silenced!