A Perpetual Tour on the Mumps Boat 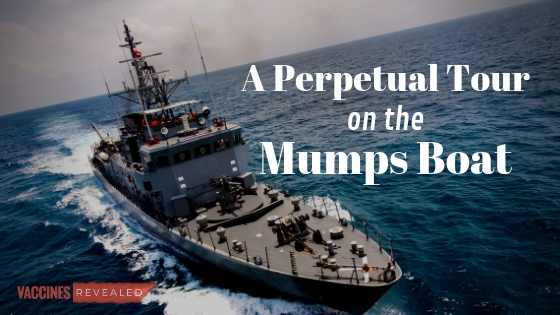 Recently, news broke that 25 military personnel aboard the USS Fort McHenry have been diagnosed with a “mumps-like illness.” As a precaution, the ship and its entire complement of 703 US Marines are stuck in a 2-month purgatory of perpetual sailing–unable to make port until the crew has been mumps-free for 30 days.

The first case of this illness was diagnosed in December and none of the Marines who became ill suffered any serious side-effects. In fact, it seems to have been an unremarkable illness– except that there are several things about the situation that deserve our rapt attention:

Describing the outbreak as a “mumps-like illness” is vague and deceptive. Parotitis is the swelling of the parotid glands that gives those who are sick with mumps the chipmunk-cheeked look that’s classically associated with the disease. The other possible causes of parotitis are a bacterial infection, auto-immune disease, dehydration, HIV, and bulimia–all of which seem highly unlikely to cause an epidemic aboard a warship, especially an epidemic that the military deems contagious enough to warrant quarantine.

There’s a theory that occasionally, parotitis might be caused by a strain of the flu or Epstein-Barr virus. However, the CDC’s own website describes parotitis related to flu as “rare,” and if the cases on the USS Fort McHenry were due to the flu or another virus we can be sure that they would have reported it. The most likely explanation for contagious swelling of the parotid glands remains the mumps virus, and it’s safe to say that’s what the crew has been infected with.

Which begs the question:  if everyone aboard the boat has been vaccinated for mumps, why are they sick?

Simply put, the mumps vaccine is a farce. In fact, there have been cases where the vaccine itself caused mumps in school children. Over the years, there have been hundreds of outbreaks of mumps across the U.S. (none of them, by the way, resulted in death or serious injury). In fact, as the graph below (which was found on the CDC’s own website) shows, in the 12 years between 2006 and 2012 there were over 2,000 cases of mumps reported per year in half of the years shown:

In 2015, a complaint against Merck (the only manufacturer of mumps vaccines in the US) was filed stating that the company falsified vaccine efficiency tests by, among other things, tainting blood samples with animal antibodies to boost the appearance of the vaccine’s efficacy. The complaint also states that Merck refused to release recent data proving the claims they made about the vaccine, instead offering study results that are 50 years old.

Vaccine manufacturers, the CDC, and politicians may continue to claim that the outbreaks across the US (mostly in situations where people live together in close quarters…like college campuses and, as recent developments show, aboard ships) are due to “vaccine hesitancy,” lapsed vaccinations or the devious workings of “anti-vaxxers” who question the safety and efficacy of vaccines. But military personnel are notoriously over-vaccinated, and it can be certain that everyone aboard that ship was entirely up-to-date on their vaccines.

So why would an entire ship be quarantined over a mild illness that hasn’t caused any serious side-effects? And why would it be kept a secret since December?

Simple: The MMR vaccine fails to consistently protect people against mumps. If any population could prove that fact, it’s the over-vaccinated military. By calling the illness by its symptom (parotitis) rather than by the disease itself and by keeping the situation silent for two months, the government has shown that it will go to any lengths to protect its relentlessly pro-vaccine stance–at any cost.