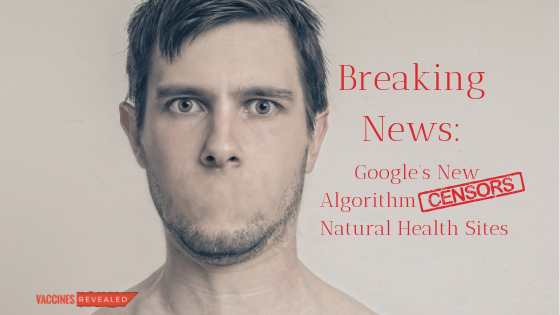 The censorship blows keep on coming. In March, we shared that Vaccines Revealed was experiencing censorship when YouTube blocked the re-release of our GMOs Revealed docuseries…citing “Terms of Service Violations,” despite the fact that our accounts are entirely free of any such violations.

Vaccines Revealed had already been suspended from YouTube, due to its new policy that blocks anything having to do with vaccine rights and safety.

Since then, we’ve seen one media outlet after another censor information that challenges the claims of Big Pharma, Big Agriculture, and Big Media.

Pinterest, Facebook, Etsy, Indiegogo, Kickstarter, Amazon, Etsy, and MailChimp have all taken measures to silence open discussion and information on subjects they don’t want to reach the public.

Now, Google has made a move to further censor freedom of the press.

In its June 3ed update, Google managed to roll out a new algorithm that hides sites that focus on natural health and healing from view.

Now, sites whose health information was once top-ranked in Google’s search engines don’t appear…and traffic to these websites has taken a serious dive, in some cases by as much as 99%.

Websites like GreenMedInfo.com, Mercola.com, NaturalNews.com, and DrAxe.com are all seeing a similar loss of traffic. These sites feature information about natural healing, healthy diets, chiropractic techniques, and other alternatives to Western Medicine and chemical pharmacology.

When you follow the money, you will always find a reason behind the censorship. Google’s parent company is in a partnership with Big Pharma giant GlaxoSmithKline, which does a lot to explain its desire to eliminate competition from websites that offer alternatives to the pharmaceuticals that are flooding our nation.

…and the loser is freedom of speech.

Friends, we have to speak up. Nothing good ever comes of censorship–it’s the first step on a very slippery slope that leads to a nation being controlled by fear, lies, and money.

Please, share this information…forward it to your email list, share it on your social media, print it out and give it to your circle of influence.

We need to speak up and protect our right to freedom of speech before it silently slips away in Big Media’s real-life digital edition of Fahrenheit 451’s book burning.