The Connection Between Food Allergies and Vaccinations 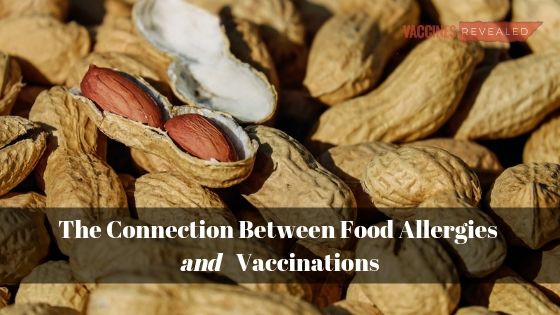 The chances are good that you know someone who has food allergies. In fact, most of us know at least one person (often a child) who has a serious anaphylactic reaction to food—often, tree nuts or peanuts. Schools have banned peanuts from lunchboxes to protect students who might die from being exposed to as little as a few molecules of peanut protein, many airlines have switched the traditional bag-of-peanuts with a safer snack, and the news is full of articles about teens whose first kiss led to a trip to the hospital (or worse) because their crush had eaten a PB&J a few hours before.

We’ve become so used to the prevalence of food allergies that it’s easy to forget that forty years ago, food allergies were nearly unheard of. The wave of serious allergies didn’t appear until the 80s, and a sudden spike in life-threatening food allergies began in the mid-1990s. In fact, food allergies increased by an astounding 377 percent between 2007 and 2017!

You read that right—an increase of 377% in less than ten years.

The greatest rise in hospital admission for anaphylaxis has been due to peanut or tree nut allergies, but other food allergies are also becoming more common. Allergic reactions to eggs, wheat, and even gelatin are also on rise. On average, in every school classroom there are at least 2 children with life-threatening allergies and allergic reactions send 200,000 people to the hospital yearly. Why are food allergies becoming so prevalent? What are we doing today that we weren’t doing 40 years ago?

The Uptick of Allergies and the Rise of Vaccines

One of the major differences in childhood today and in the 1970s and 80s is the number of vaccines given to infants and young children. In 1970, there were 12-14 vaccines recommended for children in early childhood. The 80s saw a similar number, but the MMR was added to the schedule. In the 1990s, the number of vaccinations rose to 20, not counting a flu shot (which was not yet recommended for all children). This was around the time that we saw a large uptick in food allergies.

Today, a child who is in compliance with the CDC’s recommended vaccine schedule will be exposed to a whopping 36 vaccines.

That’s more than double the number of vaccines children received 40 years ago! And in the 1990s, the rate of allergies (which had previously been on a slow but steady incline) began to spike in a way that had not been seen before. The increase in vaccines jumped again from 20 in the 1990s to 36 in early 2000, and the rate of allergies skyrocketed along with it. While there are other factors that may be playing into this concerning increase (for example, the rise of GMOs and the widespread use of glyphosate), there are strong reasons that the connection between vaccines and allergies needs to be investigated.

What Could Vaccines Have to do with Food Allergies?

Over 100 years ago, Nobel Laureate Charles Richet proved that injecting a protein into animals (and humans) can create a systemic reaction that causes the body to become sensitive to that protein. When exposed to the same protein later, this can result in severe reactions—including anaphylaxis. In fact, the Institute of Medicine released a report in 2011 that included the risk of allergy and anaphylaxis in a long list of adverse reactions to vaccines, which led to its inclusion in the US Department of Health’s Vaccine Injury Table.

What is protein doing in vaccines? Plant-based oils are used in vaccines as adjuvants or surfactants. In addition, protein from egg, gelatin, bovine serum, and even human fetal cells may be present in vaccines in varying amounts, depending on the type of vaccine and the manufacturing process. All of these, when injected into a child’s body, have the potential to trigger allergies.

In the past, some vaccines have actually contained peanut oil—and, even today, vaccine manufacturers are not required to list the exact ingredients of certain vaccine additives, including oils used as adjuvants or surfactants. In addition to the fact that peanut oil might be lurking in vaccines, other ingredients are similar enough to the proteins in peanuts and tree nuts that they can cause sensitivities in children that later result in serious allergic reactions. For example, a child who is allergic to peanuts may also be allergic to legumes and soy—the similar structure shared by these proteins can trigger a deadly reaction. Some vaccines given in early childhood contain soy peptone, which could trigger both soy and peanut allergies.

A Deadly Epidemic that Deserves Attention

The rise in food allergies is a frightening development that deserves much more attention than it has been getting. Food allergies are life-threatening, and people who live with a food allergy face many challenges. Parents whose children suffer from life-threatening allergies are constantly aware that a simple, unintentional exposure to a common food might send their child to the hospital—or worse. This complicates everyday activities like going to school, visiting a park, going to a friend’s house or eating out.

Hospitalization, office visits, epi-pens and visits to specialists are a huge financial burden on both families and insurance companies. And for those who live with food allergies, groceries are often more expensive because specialty items must be substituted for simple things that most people don’t have to think twice about.

It’s important that more research is done into the connection between vaccines and allergies. A rise of 377 percent is simply unacceptable, and without intervention, there is no reason that this epidemic will slow down. In fact, because of the push to vaccinate infants and young children with a yearly flu shot, we are likely to see an even bigger leap of health problems in the future.