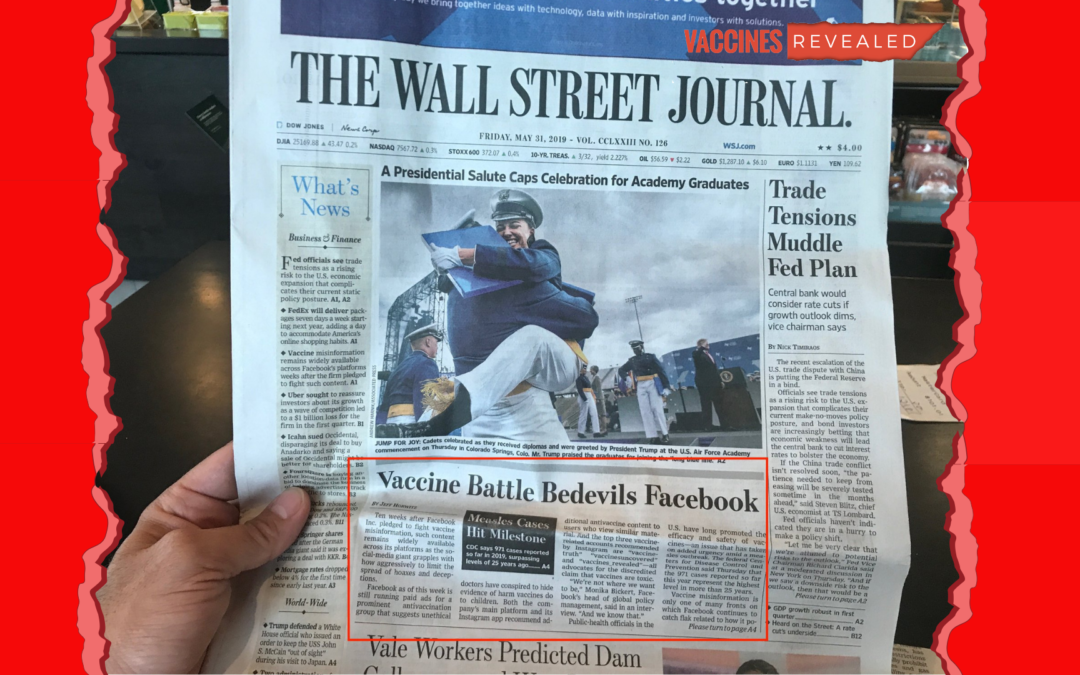 The Friday, May 31st edition of The Wall Street Journal published an article on the front page, above the fold: “Vaccine Battle Bedevils Facebook.”

The article blasts Facebook for, ironically, not following up fast enough on their decision to censor information about vaccine safety. Vaccines Revealed is mentioned:

“And the top three vaccine-related accounts recommended by Instagram are ‘vaccinetruth’ ‘vaccinesuncovered’ and ‘vaccines_revealed’—all advocates for the discredited claim that vaccines are toxic.”

In a nation that has historically prided itself in its democracy, individual rights, and freedom of the press, it’s hard to understand how a major publication can decry a public media platform’s failure to silence a group that’s speaking out, within their rights, about an issue as important as this one.

What Does “Misinformation” Mean?

The Wall Street Journal, Facebook, Amazon, and others who are accusing vaccine safety advocates of spreading “misinformation” need to clarify what they mean by this term. There are a lot of opinions being shouted and names being called, but there are few actual facts being shared.

Is it “misinformation” to say that vaccines cause autism? The vaccine injury court has awarded compensation to autism injury claims. The Department of Justice recently fired their own expert witness when he corrected an attorney who misquoted him as saying vaccines don’t cause autism–when in fact he actually stated that he has seen clear evidence that they do.

Is it “misinformation” to say that vaccine reactions can cause death and permanent disability? There are verified deaths recorded every year due to vaccines, as well as injury caused by encephalopathy, seizures, and life-altering damage caused by vaccines. These are recorded facts and are noted on vaccine package inserts.

Is it “misinformation” to say that vaccines can fail to provide the immunity they claim to? Re-labeling measles as a “measles-like rash” or mumps as a “mumps-like illness” in those who have been vaccinated against it yet still contract the disease does not change the fact that it is, in fact, the exact same disease.

Is it “misinformation” to continue to claim that vaccines are safe and effective despite knowing otherwise, discrediting those who bring up valid concerns about vaccine safety as being “anti-science” while at the same time ignoring the science that does not back their own opinion?

Yes, I think it’s safe to say that it is.

If anything is “bedeviling” the media, it’s the fact that the issue of vaccines seems to be operating under the same premise as the children’s tale, The Emperor’s New Clothes. Little else can explain how the media continues to tout the efficacy and safety of vaccines…

…Despite the package inserts produced by vaccine manufacturers themselves that detail a long list of adverse reactions including permanent injury and death.

…Despite the existence of the National Vaccine Injury Compensation Program, set up by the government to compensate those injured by vaccines, which has paid out billions to petitioners since its inception in 1988.

…Despite the fact that many people who are fully vaccinated still come down with the diseases they’ve been “immunized” against.

And, despite the irrefutable fact that many of the ingredients in vaccines are, indeed, toxic…including aluminum salts, mercury-based preservatives, and formaldehyde.

The emperor is stark naked, but the media is determined to silence anyone who dares to point that out.

It’s Vital to Allow Both Sides of the Story to be Told.

We simply can’t allow an issue that is this important to our health and to future generations to be censored. The stakes are too high.

You read that right….

Our infants receive a whopping 36 vaccines before age five, and die at a 71% higher rate than comparable countries—where children receive just 11 to 13 vaccines.

If we don’t allow this information to be shared, we will continue to be a nation that battles illness, learning disabilities, and reduced quality of life. Parents will continue to lose their children needlessly to autism, profound disability, and even death.

If this trend of censorship is allowed to continue there will be no voice of reason urging for better research, caution, and accountability where our children’s health is concerned.

Ronald Reagan once said, “Of the forces shaping the destiny of our civilization, none is more crucial to our future than the responsible reporting and truthful analysis of the events of our era.”

That holds especially true where issues of health, quality of life, and individual rights to liberty and personal choice are concerned.

Vaccines Revealed will not be threatened, censored, or bullied into silence.